The SPACEBEAM Project final aim is the design, realization, and test of a spaceborne photonics-assisted SCan-On-REceive Synthetic Aperture Radar (SCORE SAR) receiver for Earth observation application, capable of employing multiple reconfigurable beams. The core of the receiver will be implemented by a hybrid photonic integrated circuit (PIC), able to comply with the requirements of future low-Earth orbit satellites and cubesats in terms of performance, size, weight, power consumption and cost, the envisioned receiver will be based on an optical beamforming network realized as a photonic integrated circuit (PIC). The PIC will implement a precise, continuous beamforming of wideband signals (>600MHz) from a reflector antenna feeder array of 12 elements into 3 separated beams, with the capability to flexibly change the set of employed array element per beam, as well as the number of output beams (from 3 beams of 4 elements each, to 2 of 6, to 1 of 12). At the same time, the PIC will also realize a frequency-agnostic photonic down-conversion of signals in the range from 5 to 40 GHz, down to 1.5 GHz, so that the output signals can be directly digitized. These innovative features make the SPACEBEAM PIC a powerful device for future Earth observation applications. 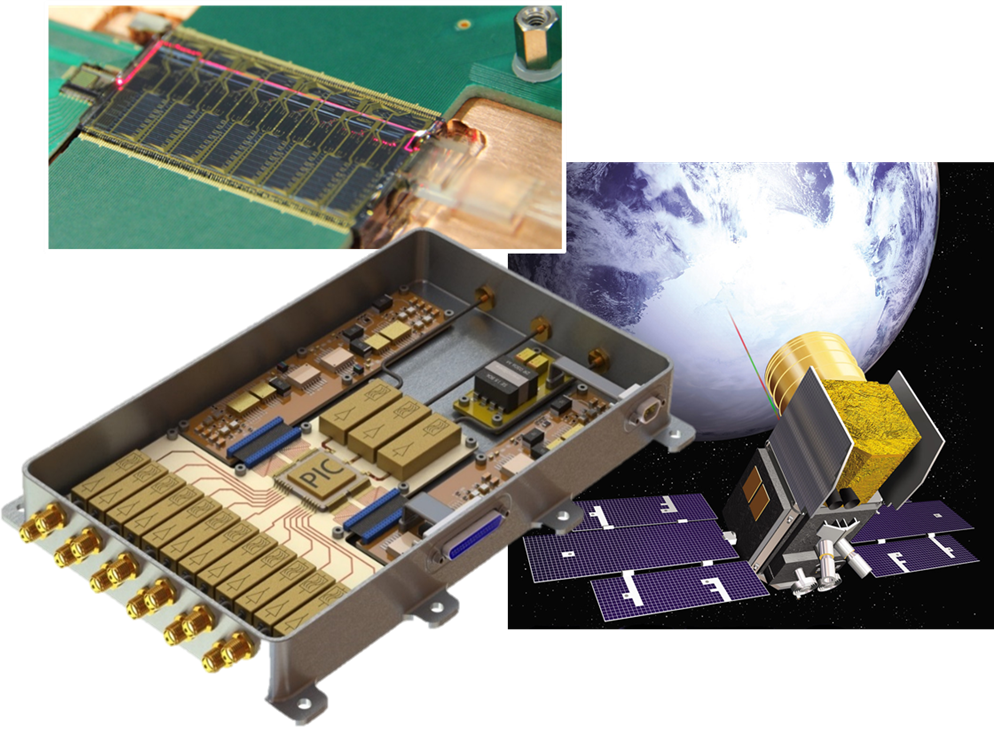 Top, left: sample of a PIC. Bottom, left: Rendering of the SCORE SAR receiver module that will be realized in the Project. Inside the module, the driving electronics is represented, with the packaged PIC at the centre.
(“Ice, Cloud, and Land Elevation Satellite (ICESat)” by NASA Goddard Photo and Video is licensed under CC BY 2.0)

The PIC will be implemented using two materials platforms, InP and TriPleX™, to achieve a compact “hybrid” chip-assembly including several active and passive functions (lasers, detectors, modulators, filters, switches, delays, phase shifters). The PIC will be controlled using a novel actuation technique based on low-power consuming piezo elements. In order to push forward the maturity of the SPACEBEAM technology (target TRL 6), the project will also develop and test a Space-compliant package for the PIC. The packaged PIC will be included in a specifically designed Elegant Breadboard (EBB) of the multi-beam SCORE-SAR sensor, to properly test the performance of the entire system. The photonics-based SCORE SAR system will therefore show more functionalities, better performance, and lower size, weight, and power consumption than the current systems.

Get updates on SPACEBEAM news

This project is supported by the European Union’s Horizon 2020 research and innovation programme under grant agreement No. 870421 (SPACEBEAM)